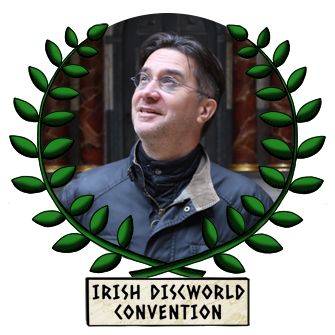 Managing Director of Narrativia, Dunmanifestin and Trustee of the Discworld Foundation - formerly Sir Terry’s PA, friend and without doubt an International Man of Mystery.

Since becoming Terry's PA more than two decades ago, Rob has been a central figure in Discworld, and is probably the busiest guest at any convention. He is Managing Director of Narrativia which holds the multimedia and merchandise rights to Sir Terry's work and Dunmanifestin which holds the literary rights - and together these keep him constantly on his toes. No lounging around the lobby playing Werewolf for him - he's got movie producers to wrangle and top-secret business calls to make. But the best thing to say about Rob is he's really nice, super fun and is always happy to chat - at least, until the next interruption!