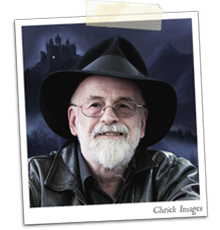 Sir Terry Pratchett – The man, the myth, the legend.

Author of the bestselling Discworld series, as well as numerous other books for both young adults and grown-ups. Award-winning documentary maker. Tireless campaigner for Alzheimer's awareness, assisted dying, and orangutans. Journalist, Knight and probably even Blackboard Monitor. But you knew all these things already – he's the very reason that there even is an Irish Discworld Convention. He sadly passed away in March 2015, but we continue to speak his name.
He attended the inaugural IDWCon in 2009, and conducted exclusive video interviews at both the 2011 and 2013 IDWCons.