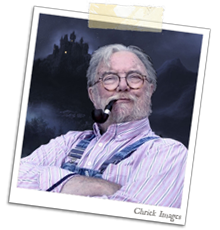 Bernard Pearson – The Cunning Artificer himself.

This devious being was born “The Cunning Artificer”, and possesses the power to forge magical and mystical objects that should only belong on the Disc. Some say they possess the power to entrance most honest people and relieve them of their wits (and their hard-earned cash). After he crossed over to Roundworld, he realised he had to use our currencies to gain power, so he sold his smuggled wares as “Clarecraft”. Eventually, this led to the setting-up of a Discworld Emporium in Wincanton, Somerset. Still residing there today, The Cunning Artificer gets more cunning by the day. Mr “Bernard Pearson” – as he is now known – was a guest at all the previous IDWCons. Unfortunately, Bernard will not be able to join us in person in 2023 but he will be there in spirit - whiskey mostly.