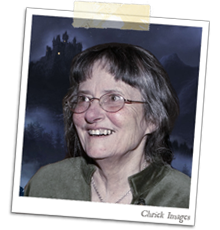 Jacqueline Simpson – Folklorist extraordinaire, and writer of the Folklore of Discworld.

Jacqueline Simpson is a researcher and author on folklore and legend. She studied English Literature and Medieval Icelandic at Bedford College, University of London. Since then, she has been an active member of the Folklore Society, having served at various times as Editor, Secretary, and President, and has written many books on various aspects of folklore. She has been a point of reference for Terry since he met her at a book signing in Worthing, her home town, in 1997 - which then led to their collaboration on The Folklore of Discworld in 2008; her talks and storytelling sessions have been a fixture of Discworld Conventions ever since. She has also been known to participate in the odd game of Werewolf.