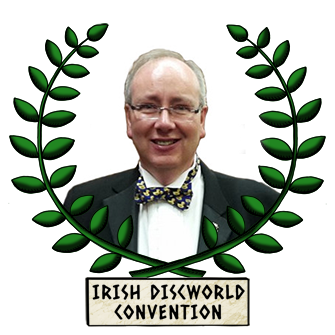 Pat Harkin doesn’t know how he met Terry Pratchett, and if cornered will try to convince you that he met him for the first time twice: once online in a computer support forum (which is not as pervy as it sounds, but a lot more nerdy) and once at a signing. He has an extensive collection of Discworld memorabilia, to the extent that he is convinced that you could take away all the walls of his house and the roof wouldn’t fall down. At the 2004 Discworld Convention Charity Auction, he volunteered to stand in for Bernard Pearson for 10 minutes and is still waiting for him to come back. He is extremely proud of having been called “Lord of the Über Fans” by Terry, in the foreword to A Slip of The Keyboard, though he accepts that the title was considerably cooler before the taxi app came along.